As a policy adviser for international & public affairs, the duties of Rianne Kouwenaar (b. 1990) include promoting collaboration between universities and other partners for international positioning, and informing members of parliament about educational and scientific developments.

Rianne became a policy adviser at the Universiteiten van Nederland in 2015. In 2015-2018 she contributed to projects in the areas of research, internationalisation, accountability, education and public affairs.

She served as deputy spokesperson, led data labs that resulted in data specials, and was project leader for Master’s programme admissions. Before joining the Universiteiten van Nederland, Rianne successfully coordinated the arrival and stay of thousands of students in her role as project assistant at the Utrecht Summer School. She previously worked as an assistant to the national project leader for the OECD’s AHELO (Assessment of Higher Education Learning Outcomes) pilot. As a trainee policy officer, Rianne provided content-based support to members of parliament in the areas of education and emancipation. Rianne earned her Bachelor’s degree in Liberal Arts & Sciences, with a focus on history and political science, at University College Utrecht. She obtained her Master’s in Global History at the Free University of Berlin and Humboldt University of Berlin. 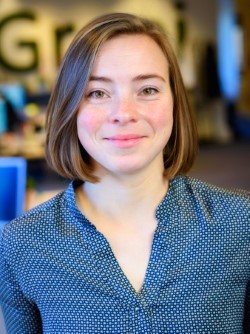