The Seventh Framework Programme (7FP, 2007–2013) was the predecessor of Horizon2020. Within this programme, Dutch researchers were very successful in the open calls. Within the scope of this European research programme, the Dutch universities were able to realise ground-breaking research projects.

In total, 7FP funded 26,454 projects, of which 5,173 were conducted in the Netherlands. Netherlands has a return percentage of 7.4%. Research universities had the largest proportion of the projects awarded to the Netherlands, at around 45%.

In total, 7FP funded 26,454 projects, of which 5,173 were conducted in the Netherlands. When you standardise the results according to GDP, the Netherlands is top of the table. 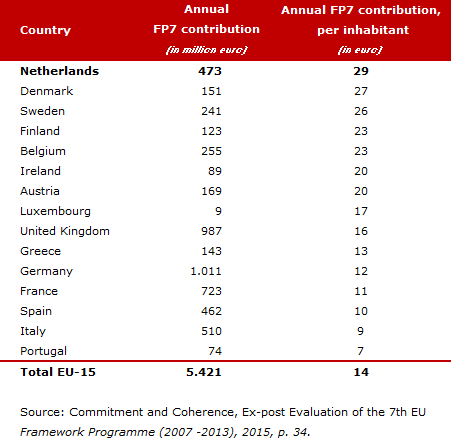 The Dutch universities are striving to continue this success within Horizon 2020. The Grand Challenges – the research areas central to Horizon 2020 – are reflected in the universities' selected profiles.