Although Dutch universities are doing everything they can to maintain this success at the European level, a number of concerns must be addressed. Project subsidies from Europe (as well as national subsidies) often don't cover all research expenses. Any shortfall between the total costs and the project subsidies must be covered by the university itself. This 'matching' of direct funding erodes the capacity to conduct research freely. 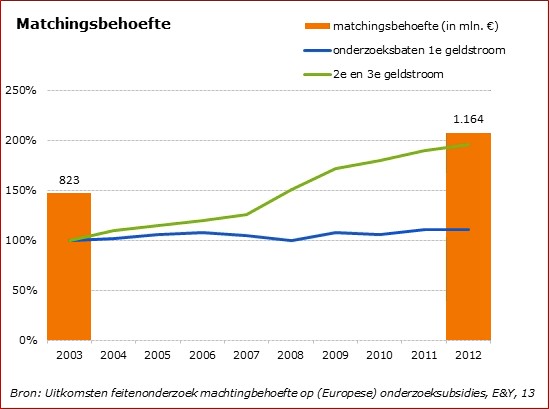 As the matching pressure has increased significantly (and is expected to rise further), successful institutions and research groups (i.e. those that acquire the most subsidies) only add to this matching pressure, especially given that direct funding of research has remained more or less the same, while the volume of European project subsidies (classified as contract research funding) has increased considerably. Successful research groups are forced to turn down subsidies as there are simply not enough funds for matching.

Incentivising European Research
As of 2015, an extra €50 million has been made available to all knowledge institutions (including universities and research institutions) by the Ministry of Education, Culture and Science for the purposes of matching within the scope of H2020. This amount is expected to remain at around €50 million in subsequent years.

Research conducted by EY found that the level of matching pressure for research funding from the EU is as high as 43%. This implies current matching needs of €149 million. The €50 million per year matching fund is therefore not sufficient. Knowledge institutions have difficulty 'matching' projects using their own resources. For the Netherlands, this problem is even greater than for competing countries, as the proportion of fixed costs (including infrastructure) at Dutch knowledge institutions is higher.

In July 2015, the NWO published these new regulations for 'Incentivising European Research' (IER). The scale of the funding in 2015 and 2016 amounts to 9% of the resources acquired from Horizon 2020 upon agreement of the contract. After two years, this percentage will be re-evaluated.