Income from the student loan system


How much income will be made available by the student loan system?
The estimated structural income from the student loan system amounts to €920 million. Part of this has already been allocated by the minister for increasing supplementary grants and vouchers for graduates. Following deduction of these expenses, a long-term figure of around €620 million remains for investment in educational quality.

€236 million of these funds will go to universities. The minister already has ideas about where this money will be spent: excellence (due to the discontinuation of the €50 million from the Sirius Programme), the Profiling Fund, modern study facilities and small-scale education. These objectives must be realised for an average amount of €17 million per university. In addition, the universities want to make their own decisions in consultation with the representative advisory bodies. However, they must also deal with cutbacks included in the coalition agreement. Once these cuts have been factored in, the universities will only begin to receive extra resources for investing in educational quality in 2023. 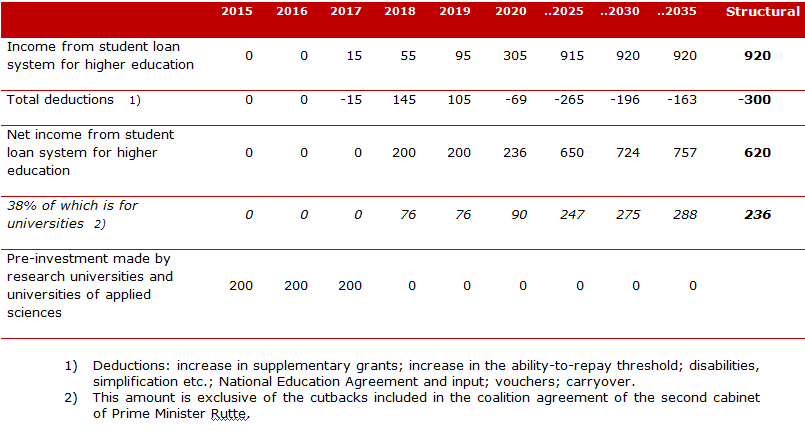 The income is exclusive of the resources made available from savings made on the student public transport pass by having students travel outside peak hours (up to €200 million by 2025). The universities are not opposed to this, provided it does not detract from the quality of education. However, they have major doubts about the feasibility of the estimated income.

When will the resources be made available?
Higher education will only begin to access the resources as of 2018, when €200 million will be transferred. The momentum will then gradually increase. The structural level of €620 million will only be reached in 10 years. To ensure that students benefit from these quality improvements sooner, research universities, together with the universities of applied sciences, will collectively invest €200 million of their own resources in the years 2015–2017.

How much extra funding will be provided in percentage terms?
The minister has stated that higher education will receive 20% extra funding. Higher education currently receives just over €4.5 billion for education, which includes performance agreements and green higher education. If the minister keeps this 20% promise, then in the long term, this will mean €290 million of extra investment, and even more in the years that follow. 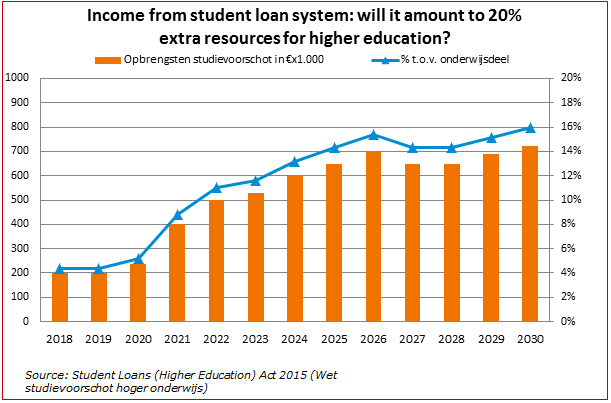